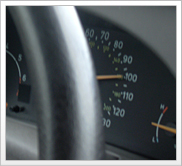 Casey Raskob, Esq. PC is an attorney in Westchester, New York. He has been fighting speeding tickets since he got his first ticket in 1978, long before law school. A twenty year career in the law, combined with lobbying work to RAISE speed limits with the National Motorist’s Association led him to the place he is today; in a car with a ringing cell phone, driving from Court to Court to save clients money, points and insurance surcharges.

The first few years of his career were spent in New York City, doing accident cases and buying and selling every single Pizzeria in Queens. His firm also handled traffic tickets for clients from Albany to Westchester to Montauk. During that time, he was going up to Albany frequently to attend Traffic Safety Conferences, and arguing for the repeal of the then current 55 mile per hour speed limit on TV, Radio and in the Newspapers (remember those ?). This also resulted in some media coverage-meet Casey on this page.

While lobbying, he learned that although our great leaders realized “everyone speeds”, they didn’t care because they get “courtesy” from Law Enforcement, and worse, were not setting any scientific speed limits because there was free tax money to be made by setting artificially low speed limits.

NY Traffic Ticket Attorney Casey learned that a few attorneys handle traffic tickets… but of those attorneys, few did it well and fewer approached it as a true specialty.

Casey combines an intimate understanding of the Law, the Technology, and the day to day practices of the law enforcement community to provide you with the best defense possible. Personally attending every Court between Albany and Montauk gives him first hand knowledge of each Judge and Clerk. Whether by Trial or Negotiation, your interests are best protected.

Casey has always been both a car enthusiast and an electronics geek. These two interests dovetail with his career in and love for the law, making him the ticket fighter he is today.

Casey graduated from Touro Law School on Long Island in 1986. He is admitted to the Bar in New York, New Jersey, Federal District Courts, the United States Supreme Court, and The United States Court of Military Appeals. He is an avid electronics geek, holding a General Class amateur radio license, K2FIX.

Most folks who have a gripe about attorneys have the same problem – they can’t get a call back. We communicate issues and results promptly and in the format you request. Many of our clients have commended our office for our prompt return calls and emails.

Since opening his own office, over twenty years ago, near Westchester NY, with statewide coverage, Casey has taken care of over ten thousand clients ranging from simple speeding to over thirty suspensions.

I love my job – how can my office help you?

Do you have a New York speeding ticket? Speeding fine? Have questions? We can help.

We fight speeding tickets in the Hudson Valley, New York City, Long Island and Upstate NY including the towns of Bedford, Southeast, Yorktown and Liberty.

Contact us today and we can help you beat that speeding ticket, speeding fine or any other traffic violation. All callers will be immediately connected to an attorney.